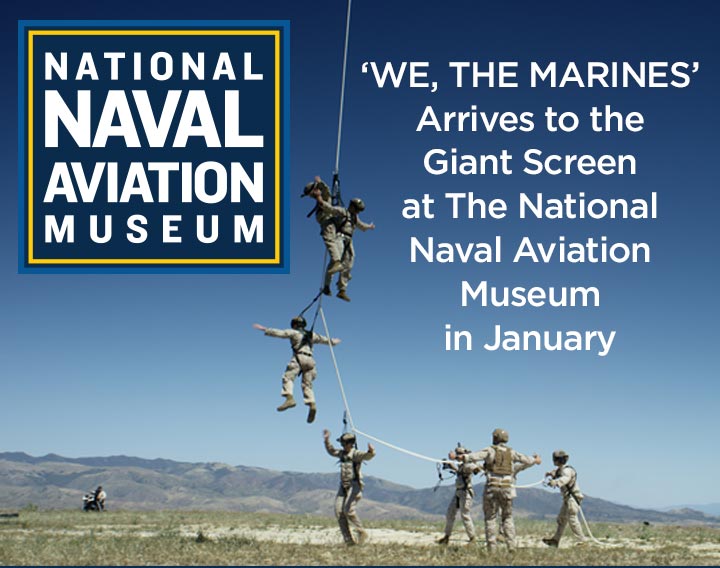 29 Dec ‘WE, THE MARINES’ ARRIVES TO THE GIANT SCREEN AT THE NATIONAL NAVAL AVIATION MUSEUM IN JANUARY

Posted at 11:54h in News by Admin 0 Comments
Share

Discover the unparalleled experience of becoming and serving as a member of the U.S. Marine Corps

December 29, 2017 –Pensacola, Fl—The Naval Aviation Museum Foundation invites audiences on an action packed adventure into the experience of becoming and serving as a member of the U.S. Marine Corps in “We, The Marines,” opening on the Giant Screen Theater at the National Naval Aviation Museum on Friday, January 5.

Narrated by former marine and Academy Award-winning actor Gene Hackman, “We, The Marines” honors something more than dedication and service. The film offers an unforgettable glimpse into the first-hand experiences of America’s “first responders” and what it takes to become the men and women who honor and defend our country.

Directed by giant-screen documentary filmmaker, Greg MacGillivray, for IMAX® and giant screen theaters, “We, The Marines” was produced in association with the Marine Corps Heritage Foundation and presented by The Boeing Company.“This film needed to have a documentary-newsreel kind of immediacy, an unstaged, unpolished, raw approach—like the Marines themselves. The result is less a set-up Hollywood-style film—with carefully laid-out and rehearsed shots—and more a spontaneous, immediate, organic film that comes from real-life experience,” said MacGillivray.

“We, The Marines” is suitable for general audiences and school groups. Its approximate run time is 38 minutes.

For information on tickets and show times, please call 850-453-2389 or visit the website at www.navalaviationmuseum.org.

The National Naval Aviation Museum, one of TripAdvisor’s “Top 25 Museums in the United States,” features nearly 350,000 square feet of displays and is one of the world’s largest aviation museums. Located aboard Pensacola Naval Air Station, the facility boasts more than 150 beautifully restored aircraft representing Navy, Marine Corps and Coast Guard aviation and is one of Florida’s most visited museums. Be sure to visit Hangar Bay One, displaying aircraft of the post-WWII era including presidential helicopter, Marine One. Among the countless things to touch, see and experience are thrilling 3D and HD flight simulators and the new Blue Angels 4D Experience. Don’t miss the drama and power of the new laser powered Giant Screen digital theater. The Cubi Bar Café offers a unique dining experience and the Flight Deck Store is the perfect place to find a souvenir that captures the spirit of Naval Aviation. Museum admission is FREE and open to the public. The National Naval Aviation Museum is open daily from 9 a.m.–5 p.m. For more information, visit www.NavalAviationMuseum.org.