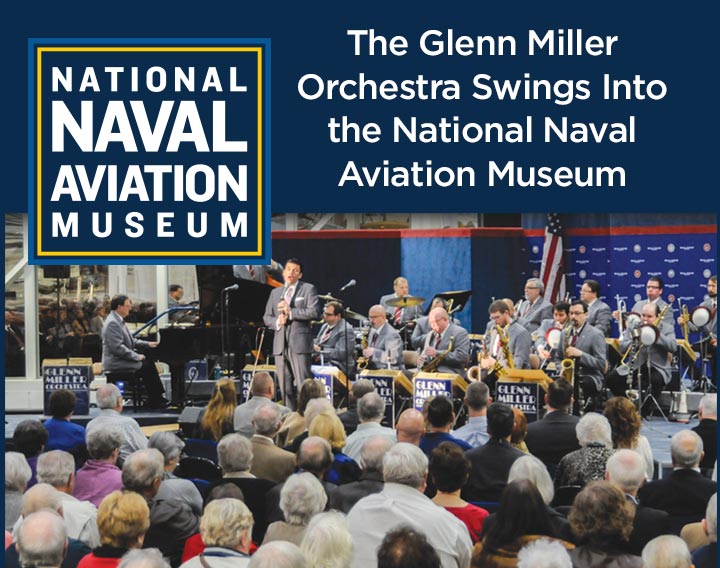 Posted at 15:56h in News by Admin 0 Comments
Share

January 9, 2017 –Pensacola, Fl—Big bands are back at the National Naval Aviation Museum. Tickets are on sale now to see The Glenn Miller Orchestra, scheduled to perform at 7 p.m. on Friday, Feb. 2, in the Blue Angels Atrium at the National Naval Aviation Museum. Concertgoers will also be able to enjoy dinner at the authentic Cubi Bar Café, which will remain open from 5:15–6:45 p.m for a special dinner menu and cash bar.

The Glenn Miller Orchestra is one of the most sought after big bands in the world. The 19-member orchestra plays many of the original arrangements of legendary Glenn Miller such as “Tuxedo Junction,” “In the Mood” and “Moonlight Serenade,” as well as modern big-band style selections. The entire repertoire exceeds 1,700 compositions allowing the orchestra to remain popular with music enthusiasts both young and old. The current Glenn Miller Orchestra has been touring consistently since its founding in 1956, playing an average of 300 live dates each year, all around the world.

Media Note: For more information about the National Naval Aviation Museum or Foundation, contact Malerie Shelton at (850) 453-2389 or mshelton@navalaviationmuseum.org.

The National Naval Aviation Museum, one of TripAdvisor’s “Top 25 Museums in the United States,” features nearly 350,000 square feet of displays and is one of the world’s largest aviation museums. Located aboard Pensacola Naval Air Station, the facility boasts more than 150 beautifully restored aircraft representing Navy, Marine Corps and Coast Guard aviation, and is one of Florida’s most visited museums. Be sure to visit Hangar Bay One, displaying aircraft of the post-WWII era including presidential helicopter, Marine One. Among the countless things to touch, see and experience are thrilling 3D and HD flight simulators and the new Blue Angels 4D Experience. Don’t miss the drama and power of the new laser powered Giant Screen digital theater. The Cubi Bar Café offers a unique dining experience, and the Flight Deck Store is the perfect place to find a souvenir that captures the spirit of Naval Aviation. Museum admission is FREE and open to the public. The National Naval Aviation Museum is open daily from 9 a.m.–5 p.m. For more information, visit www.NavalAviationMuseum.org.