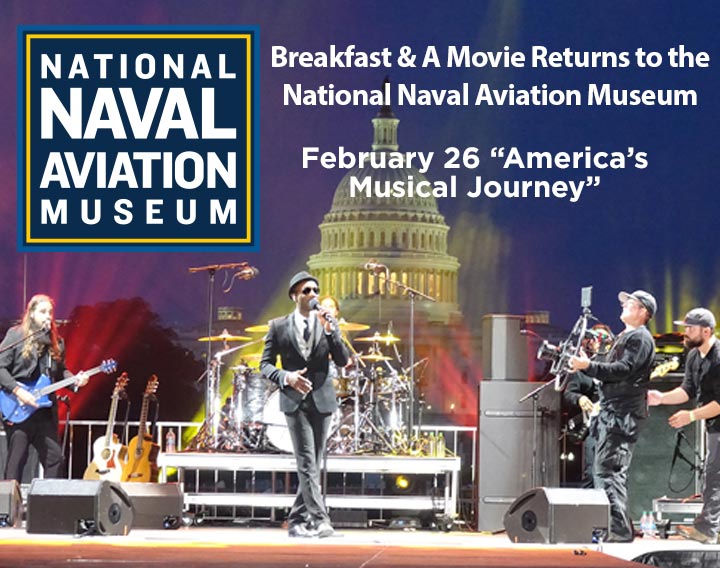 Posted at 15:40h in News by Admin 0 Comments
Share

Feb. 21, 2019, Pensacola, Fla. Breakfast & a Movie Series returns to the Giant Screen at the National Naval Aviation Museum, located aboard Pensacola Naval Air Station, every Tuesday in February. Visitors are invited to enjoy Chick-fil-A breakfast and choice of beverage from the new refreshment counter followed by a presentation and movie in the Giant Screen Digital Theater.
On Tuesday, Feb. 26, viewers will experience “America’s Musical Journey,” produced in association with Brand USA and presented by Expedia, celebrates the unique diversity of cultures and creative innovation that characterize America, as told through the story of its music.
Narrated by legendary Academy Award®-winning actor Morgan Freeman, the film follows Grammy Award®-nominated singer and songwriter Aloe Blacc as he traces the roots of
America’s music, following the footsteps of Louis Armstrong through the colorful locales and cultures where America’s music was born.
Visiting such iconic cities as New Orleans, Chicago, New York City, Nashville, Memphis, Miami and more, “America’s Musical Journey” explores the collision of cultures that gave birth to such electrifying American art forms as jazz, the blues, country, rock and roll, hip-hop and more. As audiences join Blacc on this joyful, tune-filled tour, they’ll experience uniquely American adventures such as paddle-wheel boating up the Mississippi Delta, flash mob dancing in Chicago and skydiving with Elvis impersonators over Memphis in scenes shot exclusively for the giant screen.
The Museum Historian will present stories of naval aviation history as the Museum Curator and Museum Archivist share artifacts from the museum’s extensive historical collection.
Doors open at 9 a.m. Presentation begins at 9:30 a.m. followed by a movie at 10 a.m. Cost for breakfast is $10 per person and tickets are available for purchase at the Giant Screen Theater ticket counter.
Due to popular demand, an encore presentation of “America’s Musical Journey” will follow at 11 a.m. featuring the movie only (no breakfast or historian presentation) for $5 per person.
PLEASE NOTE: All non-Department of Defense (DOD) ID holders must enter and exit through the West Gate of Naval Air Station Pensacola at the following address: 1878 South Blue Angel Parkway, Pensacola, FL 32507. All guests aged 16 and over must have a valid photo ID to enter the base.
Media Note: For more information about the National Naval Aviation Museum or Foundation, contact Malerie Shelton at (850) 453-2389 or mshelton@navalaviationmuseum.org.
About the National Naval Aviation Museum
The National Naval Aviation Museum, one of TripAdvisor’s “Top 25 Museums in the United States,” features nearly 350,000 square feet of displays and is one of the world’s largest aviation museums. Located aboard Pensacola Naval Air Station, the facility boasts more than 150 beautifully restored aircraft representing Navy, Marine Corps and Coast Guard aviation, and is one of Florida’s most visited museums. Be sure to visit Hangar Bay One, displaying aircraft of the post-WWII era including presidential helicopter, Marine One. Among the countless things to touch, see and experience are thrilling 3D and HD flight simulators and the new Blue Angels 4D Experience. Don’t miss the drama and power of the new laser powered Giant Screen digital theater. The Cubi Bar Café offers a unique dining experience, and the Flight Deck Store is the perfect place to find a souvenir that captures the spirit of Naval Aviation. Museum admission is FREE and open to the public. The National Naval Aviation Museum is open daily from 9 a.m.–5 p.m. For more information, visit www.NavalAviationMuseum.org.