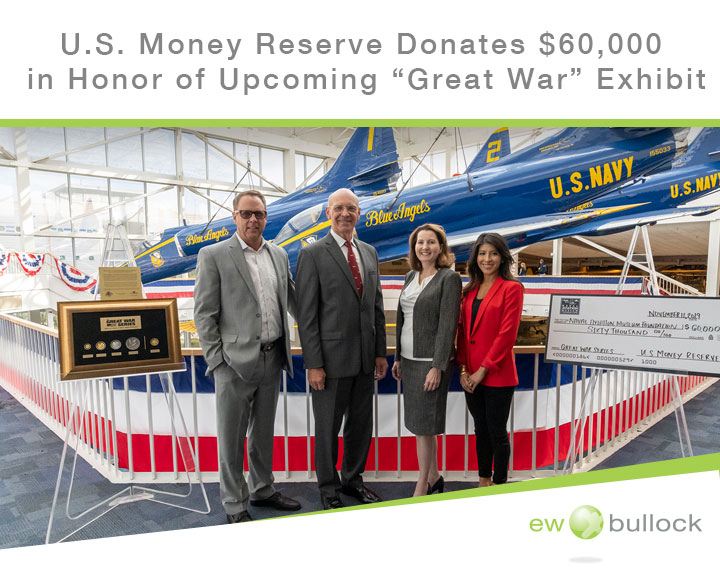 Posted at 17:15h in News by Admin 0 Comments
Share
By Katie King | Katie@ewbullock.com

U.S. Money Reserve and the Naval Aviation Museum Foundation honored World War I veterans with a check presentation and coin ceremony to commemorate the upcoming completion of “The Great War” exhibit on November 11, 2019, at the National Aviation Museum in Pensacola, FL

PENSACOLA, FL — November 15, 2019 — On Monday, Nov. 11, at 11:11 a.m. EST for Veterans Day, U.S. Money Reserve, America’s Gold Authority®, presented the Naval Aviation Museum Foundation with a check for $60,000 and a commemorative gold and silver coin series to benefit the upcoming completion of the World War I exhibit entitled “The Great War” at the National Naval Aviation Museum in Pensacola, FL.

The interactive exhibit, set to debut in 2021, will honor the service and sacrifice made by those Americans who served during World War I (1914–18). The exhibit will primarily focus on the rapid ascension of U.S. naval aviation and its crucial role in the Allied victory over the Central Powers during one of the largest conflicts in world history.

The event also included a special presentation of U.S. Money Reserve’s exclusive “Great War Series” of legal-tender gold and silver coins. The commemorative series of five coins honor the end of World War I “The Great War Series” and will be displayed at the National Naval Aviation Museum as part of the upcoming exhibit.

“It was a privilege to begin our special relationship with the Naval Aviation Museum Foundation with this incredible event on such a historic day of remembrance,” said Warren. “We look forward to honoring our nation’s past and members of the armed forces with additional endeavors like this in the future.”

In addition to the special presentation, U.S. Money Reserve and the Naval Aviation Museum Foundation look to develop a series of events and initiatives for 2020 and beyond.

World War I was the first major conflict to employ aircraft as a weapon of war. This new military technology, coupled with land and sea advancements, helped to secure the crucial Allied victory and ultimately redefine the state of modern warfare.

“On this day of remembrance, we look to the future with this special exhibit to pay tribute to one of the most defining times in world history,” said Thiessen. “The generosity of the U.S. Money Reserve team will only help foster the understanding and appreciation for those who served during this time and especially for those who gave the ultimate sacrifice for future generations.”

Four coins in “The Great War Series” comprise the End of World War I 100th Anniversary set, including a 2 oz. Proof Gold in a high-relief format, a 1/4 oz. Gold Proof, a 1 oz. Silver Proof, and a 5 oz. Silver Antiqued coin. These coins commemorate the signing of the Armistice, which ended hostilities between the Allies and Germany in 1918. A dove depicted in flight with a red poppy in its beak, embodying peace and freedom. The red poppy bursts with a bright scarlet color, serving as an iconic symbol of remembrance as the first flower to bloom in Western Europe’s devastated battlefields following the Great War’s end. The word “PEACE” is elaborately struck in a symphony of different font stylings to create a perfect mirrored-finish background.

Completing this series is the Treaty of Versailles 100th Anniversary 1 oz. Gold Proof coin in honor of World War I’s official end in 1919. Designed by U.S. Money Reserve, this coin displays a soldier holding his gun in front of the Palace of Versailles and kneeling in front of the site where the World War I peace treaty was signed. Hopeful rays of light complete the background while the locking rings of the key “100” inscription are symbolic of the new binding agreement between the previously warring nations.

“It was an incredible honor and a once-in-a-lifetime opportunity to design the Treaty of Versailles 100th Anniversary coin,” said Sean Hassell, senior art director at U.S. Money Reserve. “You’re literally able to hold a seminal piece of history in your hand with this legal-tender gold coin. I can only hope it does justice to the brave men and women who served during World War I and ensured the freedoms we have today.”

These government-issued coins were minted in limited quantities by the Perth Mint of Australia and struck from .9999 pure gold or .9999 pure silver, and designated as official legal tender. U.S. Money Reserve is the exclusive U.S. distributor of the End of World War I 100th Anniversary coin series and the worldwide distributor of the Treaty of Versailles 100th Anniversary coin.

For more information or to speak with U.S. Money Reserve leadership, please contact Christol Farris at 512-568-9991 or cfarris@usmr.com or Lacy Jansson at lacy@statuslabs.com or visit www.usmoneyreserve.com.

For more information about the National Naval Aviation Museum or Foundation, contact Malerie Shelton at (850) 453-2389 or mshelton@navalaviationmuseum.org.

U.S. Money Reserve is one of the world’s largest private distributors of government–issued gold, silver, and platinum products.

Founded in 2001, U.S. Money Reserve has grown into one of the world’s largest private distributors of U.S. and foreign government–issued gold, silver and platinum legal-tender products. Hundreds of thousands of clients across the country rely on U.S. Money Reserve to diversify their assets with physical precious metals, primarily in the form of U.S. gold and silver coins.

U.S. Money Reserve’s uniquely trained team includes coin research and numismatic professionals equipped with market knowledge to find products for precious metals buyers at every level. U.S. Money Reserve goes above the industry standard to provide superior customer service, with the goal of establishing a long-term relationship with each and every one of its customers. U.S. Money Reserve is based in Austin, Texas. Like them on Facebook, connect on LinkedIn, and follow on Twitter.

About the Naval Aviation Museum Foundation

The Naval Aviation Museum Foundation is the nonprofit, 501(c)(3), sole benefactor to the National Naval Aviation Museum—and the fuel that allows the museum to take flight. The Foundation is responsible for funding all museum operation, expansion and activity. The Foundation works diligently to raise funding through gifts and memberships. All funding, aside from Foundation staffing and operational costs, goes to the operation, maintenance and enhancement of the museum, including museum expansion, aircraft preservation, conservation and maintenance, development of new exhibits and support of day to day functions—including custodial services, marketing, operation of the Museum’s various attractions (such as our Naval Aviation Memorial Giant Screen Theater, flight simulators, Blue Angels 4D Experience and Flight Deck gift shop), as well as the production of major events at the Museum. The Foundation also supports the advancement of STEM education through the National Flight Academy, a cutting edge, aviation-themed learning experience.