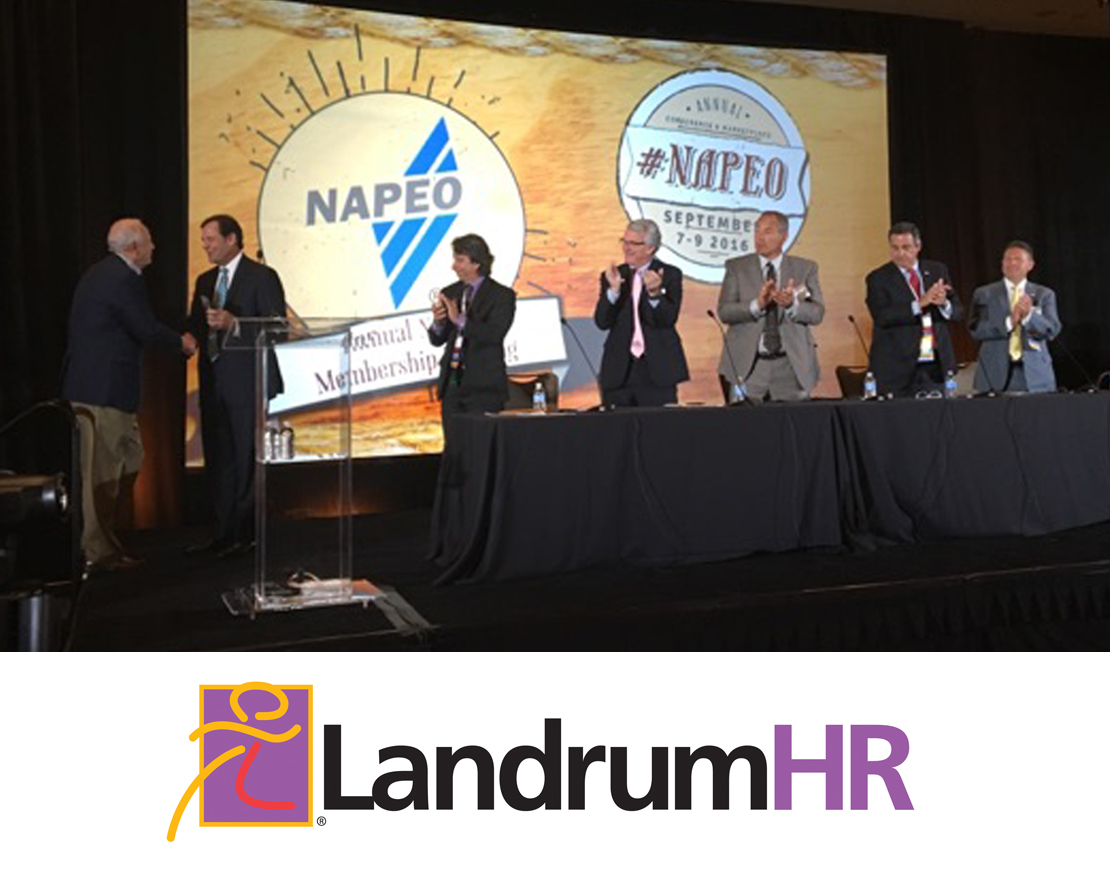 Posted at 15:14h in News by Admin 0 Comments
Share

The award is given annually to an individual who has provided exemplary leadership and service, who has a reputation of fair and ethical dealings, who demonstrates a willingness to help others, who is active in his or her community, who devotes time and energy to improving industry efforts on a local or national basis.“The description of this award exemplifies my father, and anyone on our staff or in our industry that has worked with him would attest to that,” said Britt Landrum, III, president of Landrum Human Resources. “He has always been willing to lend a helping hand, not only to those in need, but for literally hundreds of job seekers that have needed career guidance.”The selection committee is comprised of four members, including NAPEO’s Midwest Leadership Council Chair and three members at-large. The award was presented on September 9, 2016 during the association’s 2016 Annual Conference and Marketplace in Austin, Texas.

“I’m honored to be recognized with this award,” said H. Britt Landrum, Jr. “This is a great industry and it’s been my privilege to be a part of it.”Britt Landrum, Jr., began his business as a small job placement agency. Now in its 46th year, the company has grown from two internal staff members to more than 160 human resources professionals. With locations in Florida, South Carolina and North Carolina, and serving 44 states, the company provides comprehensive staffing services, human resources training and consulting, as well as PEO services. The company is a past recipient of the Florida Governor’s Sterling Award recognizing organizational excellence and for five years in a row was named by the national Society for Human Resource Management as one of the Top Twenty-Five Best Small Businesses to Work for in America.

Landrum, Jr., has served as a board member, chairman or other leader of virtually every professional organization involved in the staffing and professional employer organization industry — including NAPEO; the Florida Association of Professional  Employer Organizations (FAPEO); the Florida Board of Employee Leasing; the Florida Employment Association; the National Association of Independent Temporary Services (TempNet); and the Employer Services Assurance Corporation (ESAC). His leadership and expertise in his industry has earned him and his companies a shared respect from business owners along the Gulf Coast and surrounding markets.

In addition, Landrum, Jr., has been an innovative, energetic and respected Pensacola business leader and philanthropist for more than half a century. His passion to stay involved in the Pensacola community can be traced back to 1963 as a member of the Pensacola Jaycees. He has continued to represent Landrum and the business community in many leadership roles.