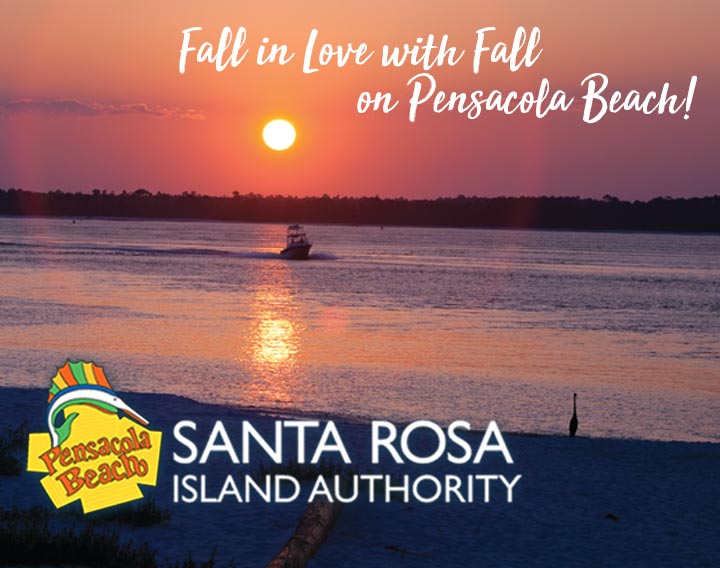 24 Aug Fall in Love with Fall on Pensacola Beach

Posted at 13:24h in News by Admin 0 Comments
Share

August 23, 2018 –Pensacola Beach, Fl—When the summer season comes to an end on Pensacola Beach, the activities, adventures and excitement keep going. Pensacola Beach is home to award-winning sugar-white beaches, delectable coastal cuisine and an event calendar brimming with festivals, the arts and seasonal celebrations in the fall. We look forward to welcoming visitors during Pensacola’s best time of year to visit — when the weather is gorgeous, the beach water is still warm and you can experience the activities and beachfront accommodations without the crowds or summer price tags.

1. Foodie ParadiseSeptember is the start of Pensacola Beach’s busy fall festival season, and things kick off with a culinary explosion that showcases everything from innovative, gourmet coastal cuisine to the fried favorites. Taste of the Beach, Sept. 15, takes place directly on the white sands of Pensacola Beach. Entry for the daylong festival is free, with more than 20 beach restaurants showcasing their signature dishes for $5 each. The festival puts on a professional chef cook-off competition, an amateur competition, a free concert, beer samplings and more. This year, six Pensacola Beach chefs will spice up the food and butter up the crowds to present a simultaneous live Q&A-style cooking demonstration, followed by a ticketed chef sampling. If you like seafood, you’re not going to want to miss this event.

Forget the sweating and the potential sunburns you might get during the summer fishing season. Instead, the fall brings more comfortable fishing conditions with the chance to catch some of the same summer species as well as fall favorites. Leading into October, you can still catch some of the best grouper, amberjack, triggerfish, wahoo, marlin, and tuna, as well as red snapper when the season reopens for a short period. King mackerel is a good catch in the early fall, and the big redfish appear in November when the water cools down. Charter captains and boats in Pensacola Beach and Perdido Key are abundant, passionate and knowledgeable on the hottest fall fishing holes. Or take a walk down the 1,471 foot Pensacola Beach Gulf Pier, home to a community of local fisherman who are always more than happy to let visiting anglers know what’s biting. It’s also one of the best places on the beach to catch a sunset or sunrise.

3.  Music under the moonlight

Cooler nights invite you to take advantage of the free outdoor entertainment on Pensacola Beach. Pensacola Beach’s outdoor concert series, Bands on the Beach, continues every Tuesday night until the end of October and attracts hundreds who want to sip and sway under the starry beach skies. A well-diversified line up of local and regional artists take the stage at the beautiful Gulfside Pavilion on Pensacola Beach each week at 7 p.m. The event attracts thousands of fans throughout the season. Folks of all ages set up their lawn chairs, blankets, and picnic baskets. Heck, some folks go all out with tables and fully prepped meals while enjoying the music. For those less prepared, concessions and cocktails are available nearby. Whatever your style, the venue’s beach backdrop, accompanied by a subtle island breeze, is hands down unparalleled.

Fall is the perfect time to enjoy the emerald green waters of the Gulf of Mexico when the weather is divine. Explore the award-winning, pristine sands, watch for migrating birds, and learn about the flora and fauna while visiting the Pensacola Beach Eco Trail. Or, if you prefer by water, discover the seashore by kayak while paralleling the island on the Santa Rosa Sound, a paddlers’ paradise where kayakers and canoeists enjoy the gorgeous views when it’s not so warm. Free, public stargazing sessions on Pensacola Beach continue in September and October and offer the chance to see the stars, planets and even galaxies through a dozen of powerful telescopes set up by the Escambia Amateur Astronomers’ Association.

5.  We’ve got the Blues
Pensacola may be known as the “The Cradle of Naval Aviation” and lucky to be home to the Blue Angels, the U.S. Navy’s elite flight demonstration squadron — but the first weekend of October brings a different kind of Blues to Pensacola Beach, one that music lovers won’t want to miss. The 10th annual Pensacola Beach Songwriters Festival runs October 3-7, when many of the restaurants and bars on Pensacola Beach play host to more than 100 award-winning and up-and-coming musicians and songwriters who come to the beach for the weekend to perform their original songs and talk about the stories behind the music.
Pensacola Beach is owned by Escambia County, Fla., and is under the direction of the Santa Rosa Island Authority (SRIA). The SRIA was created by the Florida legislature in 1947 under Chapter 24500. The SRIA does not receive tax support from the taxpayers of the county. It is fully funded from lease fees collected from business and residences on the beach. The Island Authority board is made up of six members; five are named by members of the Escambia County Board of Commissioners whose term is the same as the commissioner who appointed them. Registered voters on Pensacola Beach elect the sixth member. The elected member’s term is two years.