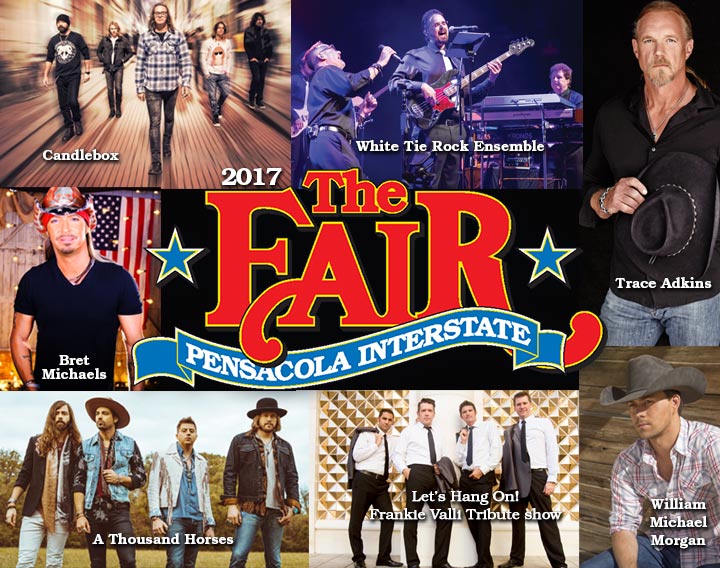 Posted at 11:18h in News by Admin 0 Comments
Share

August 23, 2017 –Pensacola, Fl—Pensacola’s biggest and longest-running annual agricultural and entertainment tradition returns Thursday, Oct. 19 through Sunday, Oct. 29, bringing with it the excitement of attractions and screams from exhilarating rides, exhibits, fair food, fun and shows for the whole family. The 83rd Pensacola Interstate Fair has many exciting surprises in store, including a star-studded line-up of live music acts and a special guest appearance by two mutated turtle warriors.

“The music artists and live entertainment we have lined up this year are terrific,” said Don Frenkel, Pensacola Interstate Fair General Manager. “We are thrilled to bring such a variety of acts to Pensacola.”

The Fair’s musical line-up kicks off opening night with the “Cat Country 98.7 BIG Lip Sync Battle Finals,” a final epic showdown on Thursday, Oct. 19, at 7 p.m. This year, the weekly Lip Sync Battle takes place at the Sandshaker Lounge on Pensacola Beach every Thursday evening starting Sept. 21 and running through Oct. 19, when the final battle will take place. Contestants can compete individually or as a group of up to 10 people for the chance to win a cash prize at the finals on October 19. Each week, three winning acts are chosen, and the 12 acts from all four weeks battle it out on stage during the finals for the chance to be the Lip Sync champion.

Seattle post grunge band Candlebox will take the stage on Friday, Oct. 20, at 7:30 p.m. Lead singer Kevin Martin will belt out the familiar hit songs, “Far Behind,” and “You.” The band, which sold more than four million copies of its 1993 self-titled debut album, will also play a new batch of songs from its 2016 release, “Disappearing in Airports.” Still, fans can expect plenty of the songs that put Candlebox on the rock charts in the mid-1990s.

Nashville-based Southern rockers, A Thousand Horses, will take the stage on Saturday, Oct. 21, at 7:30 p.m. to play hits from their debut country album, 2015’s “Southernality.” The country-rock quartet has been flying high this year after their first Academy of Country Music Awards nomination.  A Thousand Horses just released their second LP, Bridges, this year —  a mix of six new songs and seven live tracks — so expect to hear a mixture of old and new on Saturday night.

The second annual Miss Pensacola Interstate Fair Beauty Pageant will start at noon on Sunday, Oct. 22 on the Pepsi Open Air Stage. Pageant contestants will compete in one of seven age categories, ranging from infant to 18 years old. A queen and two alternates will be chosen from each age group. All proceeds benefit the Livestock program.

Bring the kids out Monday, Oct. 23, on Cox Day, to meet Donatello and Leonardo from the Teenage Mutant Ninja Turtles. The turtle duo will make two live Meet & Greet appearances on the Pepsi Open Air Stage from 4:30-6:00 p.m. and again from 7:00-8:30 p.m. The first 200 fans in line for each appearance will receive a free downloadable photo with Donatello and Leonardo.  Lines will close 30 minutes before the end of each show, so get there early!

Might as well “Jump” and “Walk This Way” to the Pensacola Interstate Fair to welcome local band White Tie Rock Ensemble on Tuesday, Oct. 24, at 7 p.m. as they present a tribute to Aerosmith and Van Halen. The local group of musicians recreates classic rock albums with the precision and detail of a symphony. These dynamic elements combine to produce the unforgettable White Tie sound. So whether you’re a “Rag Doll,” or “Runnin’ with the Devil,” or just “Livin’ on the Edge,” White Tie promises to deliver the ultimate classic rock.

On Wednesday, Oct. 25, the public is invited to attend and participate in the Youth and FFA Livestock Auction at 6 p.m. from the Livestock Arena.  More than 30 steers will be auctioned off this year, so don’t miss out. Then, at 8 p.m., the famously deep-voiced country music legendTrace Adkins will take the Pepsi Open Air Stage to get the crowds riled up with hits such as “Honky Tonk Badonkadonk,” “Ladies Love Country Boys,” and “You’re Gonna Miss This,” or show off his softer, more emotional side, with ballads like “Then They Do,” “Just Fishin’,” and “I’m Tryin’.”

As part of our special Senior Appreciation Day, come on out and take part in an afternoon and evening of nostalgia on Thursday, Oct. 26, at 3:30 and 7 p.m. as the Frankie Valli Tribute Show – Let’s Hang On! takes the stage. Let’s Hang On is a group of 10 seasoned entertainers who are preserving the music and style of the iconic harmonizing group Frankie Valli and the Four Seasons, while also paying tribute to the Broadway show, “Jersey Boys.” Dance the night away to some of the best music from the 1960s.

‘80s GlamRock fans will have an opportunity to rock out to “Every Rose Has its Thorn,” on Friday, Oct. 27, at 7:30 p.m., as the Fair welcomes back musician and heartthrob Bret Michaels. Michaels first gained fame in the ‘80s as the lead vocalist of the glam metal band, Poison, selling over 45 million records worldwide. Besides his career as lead singer, Michaels has several solo albums to his credit and appeared in the hit VH1 reality show “Rock of Love with Bret Michaels” and its sequels, which inspired his successful solo album “Rock My World.” He was also the winning contestant on NBC’s reality show “Celebrity Apprentice 3.”

Up-and-coming American country music singer and songwriter William Michael Morgan will bring his powerful voice, soulful songs and signature style of twang to the stage on Saturday, Oct. 28, at 7:30 p.m. to close out the fair concert series. A fresh young talent hailing from Vicksburg, Mississippi, Morgan will perform songs off his debut studio album, “Vinyl.” Listen for his deep, traditional country-inspired vocals in hit singles like, “I Met a Girl,” and “Missing.”

In addition to the daily music acts, fairgoers can experience an interactive, hands-on exotic animal zoo at the Eudora Farm’s “Animals from Around the World” station. The petting zoo is open daily from fair open to close. New this year is the Barnyard Cackle Review, starting Monday, Oct. 23 until Sunday, Oct. 29. Rocky Da’ Roosta and his cast of cackling hens will entertain guests throughout the entire day.

All musical performances are located on the Pepsi Open Air Stage. Entertainment shows at the Pensacola Interstate Fair are free with the price of admission.

For complete information, call (850) 944-4500 or visit PensacolaFair.com. You can also join us on Facebook at facebook.com/PensacolaInterstateFair.