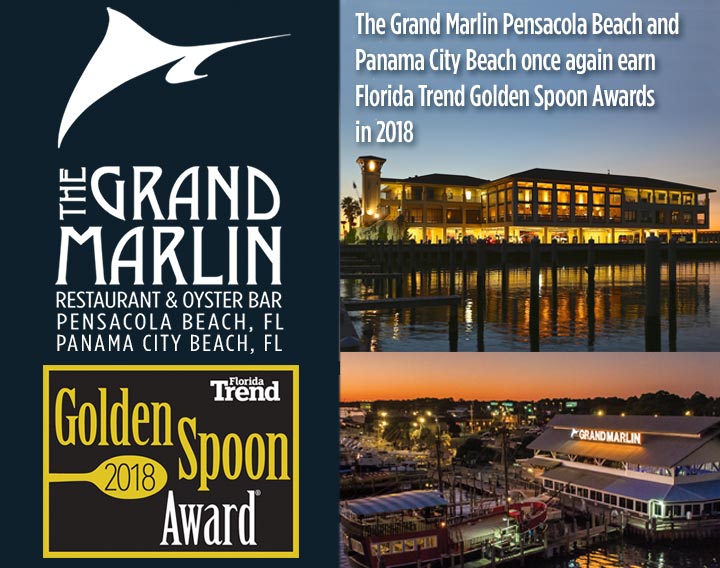 Posted at 10:56h in News by Admin 0 Comments
Share

Given annually to only the top restaurants in Florida, the Golden Spoon award remains a highly coveted culinary award. This honor marks the second consecutive year for the Panama City Beach location, and the third for the Pensacola Beach location.

“Florida has almost 21 million people and thousands of restaurants. Our awards are highly selective and include approximately 100 top restaurants, which means only a handful of establishments in many markets,” said Chris Sherman, Florida Trend restaurant editor. “Having high prices, longstanding popularity or current buzz does not guarantee a Golden Spoon.”

This year 104 restaurants earned a Golden Spoon in Florida.

The Grand Marlin Panama City Beach, which first opened its doors in October of 2016, is thrilled to have been recognized for the second consecutive year. The restaurant emphasizes many of the same fresh menu items of its anchor location on Pensacola Beach, with a menu that is continuously evolving and printed daily.

“We’re humbled to be recognized by Florida Trend and be among the restaurants included,” said Executive Chef and Partner Gregg McCarthy.

For more than 50 years, Florida Trend has provided readers with a guide to the state’s finest restaurants, celebrating the diversity of dining opportunities from coast to coast. These offerings range from the treasured institutions in the Hall of Fame to trendy newcomers making their debuts.

For a complete searchable list of the Golden Spoon award winners organized by region, go to FloridaTrend.com/Golden-Spoons.

To make a reservation at The Grand Marlin Restaurant and Oyster Bar on Panama City Beach or Pensacola Beach, and to see the complete menus, visit www.thegrandmarlin.com. Also, find us on Facebook.

About The Grand Marlin

The Grand Marlin features the area’s best selection of seafood, highlighted by daily specials from the kitchen of award-winning Chef Gregg McCarthy. Printing their menu daily, The Grand Marlin ensures its choice of fish and shellfish will be the freshest on the Gulf Coast. The Grand Marlin offers a tranquil, relaxed atmosphere where patrons can enjoy the most memorable dining experience with spectacular water views. The original location opened on Pensacola Beach in 2010. In 2016, a new location in Panama City Beach was launched.