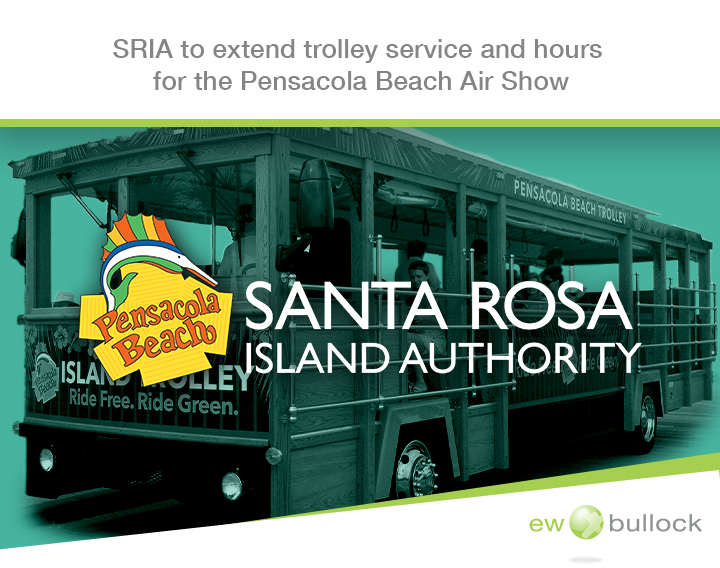 PENSACOLA, Fla. (June 28, 2022) — To help alleviate traffic congestion for the Pensacola Beach Air Show, the Santa Rosa Island Authority (SRIA) is extending public transportation hours along the island on Friday, July 8, and is adding extra buses to the schedule on Saturday, July 9.On Friday, July 8, the SRIA’s three, free open-air trolleys will begin transporting customers starting at 7:30 a.m. and extend their service to Park East, located a mile east of Portofino Resort, until 6 p.m. Following that, the regular route will resume until midnight.

On Saturday, July 9, starting at 6:30 a.m., the SRIA will have seven buses in addition to the three open-air trolleys running and will extend their service area to Park East until 6 p.m. Following that, the three open-air trolleys will resume normal operations until midnight.
On Friday and Saturday, buses and trolleys will service passengers from Park East and Park West to Casino Beach throughout the day. Post-show, trolleys servicing Portofino Resort/Park East will be staged on Via de Luna directly across from Santa Rosa Island Authority (facing east). Trolleys servicing Park West will be staged on Ft. Pickens Rd. adjacent to The Sandshaker (facing west).
Due to extreme traffic and congestion buildup on Friday and Saturday, trolley service to the access road stops (Grand Marlin, Radical Rides/Laguna’s, Quietwater Beach, and the Boardwalk) will be temporarily suspended until 6 p.m.

The SRIA wants to remind all passengers that they will only be picked up and dropped off at designated trolley stops.

Passengers who wish to get back to their vehicles as soon as the air show ends need to be on the first fleet of buses leaving Casino Beach post-show. Due to the gridlock that occurs immediately following the air show, riders should expect to wait as long as 90 minutes for the trolleys or buses to return to Casino Beach if they are not on the first trip out.
The official 2022 Pensacola Beach Air Show will begin at 11 a.m. Saturday. The free trolley and bus service is provided by the Santa Rosa Island Authority and Escambia County Area Transit (ECAT) handles the expert driving.
About the Santa Rosa Island Authority
Pensacola Beach is owned by Escambia County, Fla., and is under the direction of the Santa Rosa Island Authority (SRIA). The SRIA was created by the Florida legislature in 1947 under Chapter 24500. The SRIA does not receive tax support from the taxpayers of the county. It is fully funded from lease fees collected from business and residences on the beach. The Island Authority board is made up of six members, five are named by members of the Escambia County Board of Commissioners whose term is the same as the commissioner who appointed them. Registered voters on Pensacola Beach elect the sixth member. The elected member’s term is two years.