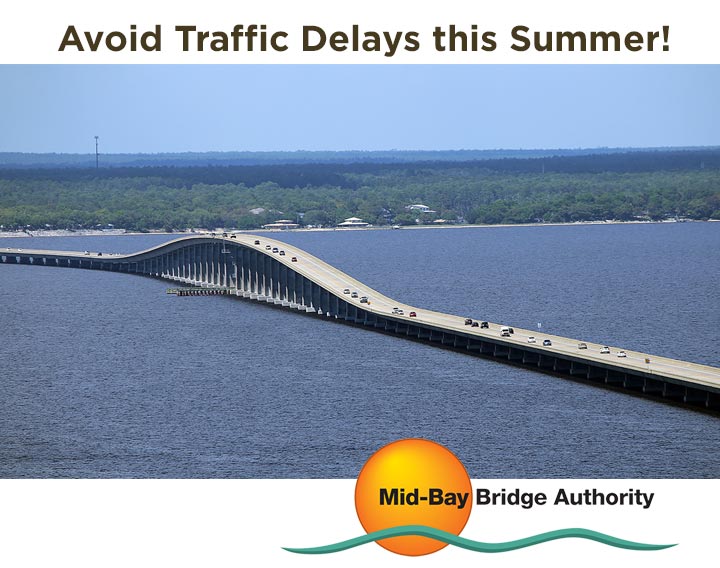 Posted at 16:44h in News by Admin 0 Comments
Share

May 23, 2017 –Niceville, Fl—The Mid-Bay Bridge Authority would like to remind Okaloosa County residents and Mid-Bay Bridge customers to expect heavy congestion on and around the Mid-Bay Bridge on Saturdays during the peak tourism season, generally lasting from Memorial Day through Labor Day weekends.

Florida Gov. Rick Scott says tourists are increasingly flocking to the state for vacations. Domestic visitors to Florida hit record numbers last year — nearly 113 million tourists in 2016 — and that trend is continuing in the first three months of this year.

A recent Visit Florida tourism survey determined that of the 4.1 million annual domestic visitors to Okaloosa County in 2015, 48 percent (or nearly 2 million people) traveled during the peak summer travel season.

The city of Destin is the No. 2 drive-to destination in the state, according to the Destin Chamber of Commerce. The Destin population grows by up to 85,000 people during its peak summer season, with the vast majority of visitors arriving and departing on Saturdays. This growth represents a 700 percent increase in population when compared to the size of the City of Destin.

With most accommodation check-outs taking place on Saturday mornings, the northbound traffic across the Mid-Bay Bridge, and through the toll plaza, will become congested early in the morning and lasting until around noon.

Conversely, with most accommodation check-ins occurring on Saturday afternoons, traffic along all approaches to the Destin community will become congested and result in considerable delays. Motorists should expect the southbound lanes of the Spence Parkway approaching the Mid-Bay Bridge toll plaza to be saturated with traffic from approximately late morning until about 7 p.m. during Saturdays in the summer. Thus, if at all possible, travel to Destin should be made either before or after the peak period noted above.

The Mid-Bay Bridge Authority has and will continue to investigate various ways to improve traffic flow in the vicinity of the toll plaza, but unfortunately, the volume of traffic that merges into a single southbound lane on the bridge exceeds the capacity of the system.