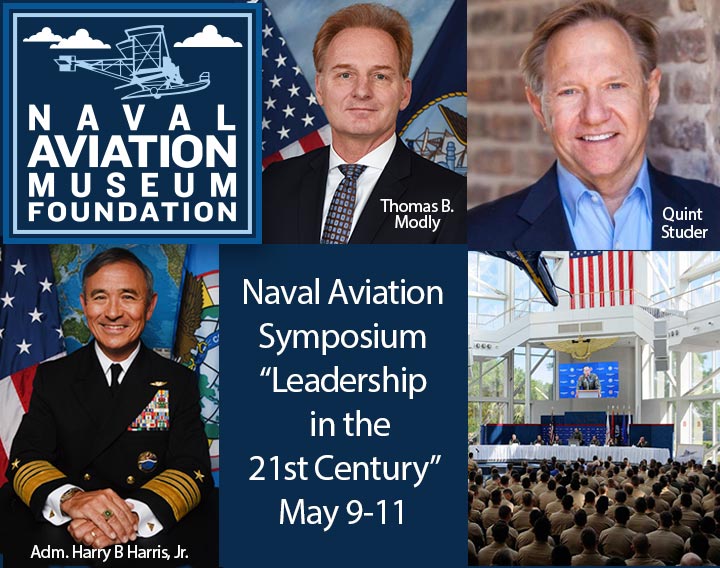 Posted at 13:53h in News by Admin 0 Comments
Share

April 25, 2018 –Pensacola, Fl—Glimpse into the history and the future of naval aviation at the Naval Aviation Museum Foundation’s Annual Symposium, May 9-11. This three-day event, on board Pensacola Naval Air Station, will feature a golf tournament on Wednesday, followed by distinguished panelists and speakers on Thursday and Friday inside the National Naval Aviation Museum.

The theme for the Symposium 2018 is “Leadership in the 21st Century.” Starting at 9:15 a.m. Thursday, the first panel will feature awardees of the prestigious VADM James Stockdale Leadership Award who will share their thoughts on command leadership. The 10:45 a.m. session will discuss Leadership Under Stress. Following a 12:15 p.m. luncheon on the Cabot Flight Deck, Pensacola businessman and community leader Quint Studer and Navy Adm. Harry B Harris, Jr., commander of the U.S. Pacific Command, will cohost a panel entitled: Leadership in the Private Sector vs. Leadership in the Military – Differences and Similarities, starting at 2 p.m. in the Atrium.

This year, the Foundation’s distinguished guest speaker for Thursday night’s reception is the honorable Thomas B. Modly. As the 33rd under secretary of the Navy, Modly is the Service’s second most senior official. Prior to becoming the under secretary of the Navy, Modly held positions in and out of government. He is also a graduate of the U.S. Naval Academy and served in the Navy as a helicopter pilot. On Thursday evening, following the reception starting at 6 p.m., Modly will speak on naval forces in our national defense. Prior to the keynote speech, Adm. Harris will pass the Grey Owl trophy to Vice Adm. Herman Shelanski. The Grey Owl trophy is bestowed on the longest serving Naval Flight Officer on active duty.

The Symposium will culminate Friday morning in the Atrium as Vice Adm. DeWolfe Millier III, Commander of U.S. Naval Air Forces, moderates a distinguished panel of flag and general officers in a discussion about the current challenges facing naval aviation and its future initiatives.

Begun in 1987, the Symposium series aims to preserve the rich history and proud heritage of Naval Aviation by highlighting historical events in which U.S. Naval Aviation has played a major role. Each May, the Foundation’s annual symposia attracts an average of 3,000 attendees, among who are active and retired military, defense industry representatives and the general public, as well as extensive coverage by the media.

For a full schedule of events, visit www.navalaviationmuseum.org/event/naval-aviation-symposium-2018. For more information or to reserve your seat, call the Naval Aviation Museum Foundation at (800) 327-5002 or (850) 453-2389, or register online here.

Media Note: Thomas Modly, the under secretary of the Navy, will be available for interviews from the press following his speech on Thursday evening.

For more information about the National Naval Aviation Museum or Foundation, contact Riannon Boven at (850) 453-2389 orRiannon@appleyardagency.com.

The National Naval Aviation Museum, one of TripAdvisor’s “Top 25 Museums in the United States,” features nearly 350,000 square feet of displays and is one of the world’s largest aviation museums. Located aboard Pensacola Naval Air Station, the facility boasts more than 150 beautifully restored aircraft representing Navy, Marine Corps and Coast Guard aviation, and is one of Florida’s most visited museums. Be sure to visit Hangar Bay One, displaying aircraft of the post-WWII era including presidential helicopter, Marine One. Among the countless things to touch, see and experience are thrilling 3D and HD flight simulators and the new Blue Angels 4D Experience. Don’t miss the drama and power of the new laser powered Giant Screen digital theater. The Cubi Bar Café offers a unique dining experience, and the Flight Deck Store is the perfect place to find a souvenir that captures the spirit of Naval Aviation. Museum admission is FREE and open to the public. The National Naval Aviation Museum is open daily from 9 a.m.–5 p.m. For more information, visit www.NavalAviationMuseum.org.