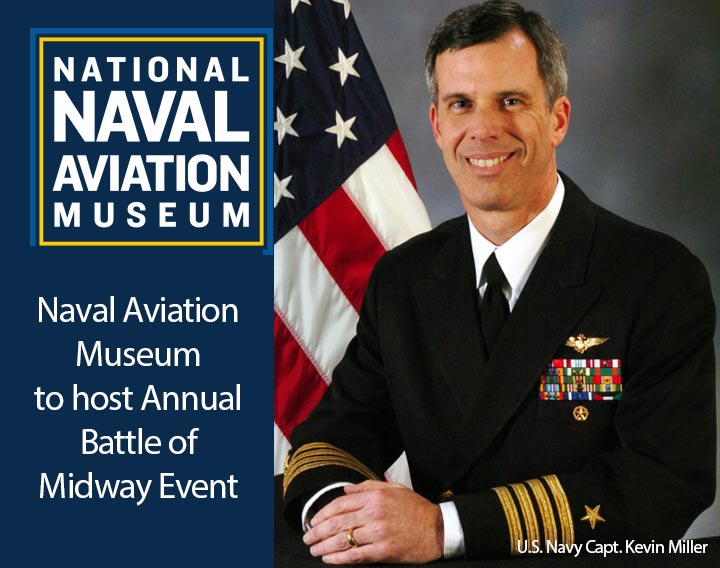 Posted at 11:24h in News by Admin 0 Comments
Share

May 24, 2018 –Pensacola, Fl—The National Naval Aviation Museum will commemorate the 76th anniversary of the Battle of Midway with a ceremony held Monday, June 4, at 10 a.m. inside the Blue Angels Atrium.

The host command for this year’s event is the Naval Education and Training Professional Development Center (NETPDC). Midway scholar and retired U.S. Navy Capt. Kevin Miller will be the guest speaker. Miller is currently researching a novel about the battle.

The Battle of Midway was an epic naval engagement that occurred six months after the attack on Pearl Harbor, from June 3-7 in 1942, in which U.S. Navy and Marine Corps forces turned back a planned invasion of Midway Atoll, sinking four Japanese aircraft carriers in the process. The battle is considered a turning point of the Pacific Theater in World War II.

Midway artifacts will be on display, including an SBD-2 Dauntless dive-bomber that is the only surviving aircraft to have participated in the battle. Artifacts from Marine Corps Maj. Lofton Henderson, who was killed in action at the Battle of Midway, will also be on display — including the unveiling of a rare World War II artifact donated by his stepdaughter, Robyn Conrad Adair.  The famous airfield on Guadalcanal was named in his honor.

The event will also include a showing of the film, “South Dakota Warrior,” about Lt. Cmdr. John Waldron, who was killed in action while commanding Torpedo Squadron (VT) 8 at the Battle of Midway.

The event is free to the public.

Media Note: For more information about the National Naval Aviation Museum or Foundation, or the Battle of Midway event, please contact Riannon Boven at (850) 453-2389 or Riannon@appleyardagency.com.

The National Naval Aviation Museum, one of TripAdvisor’s “Top 25 Museums in the United States,” features nearly 350,000 square feet of displays and is one of the world’s largest aviation museums. Located aboard Pensacola Naval Air Station, the facility boasts more than 150 beautifully restored aircraft representing Navy, Marine Corps and Coast Guard aviation, and is one of Florida’s most visited museums. Be sure to visit Hangar Bay One, displaying aircraft of the post-WWII era including a presidential helicopter, Marine One. Among the countless things to touch, see and experience are thrilling 3D and HD flight simulators and the new Blue Angels 4D Experience. Don’t miss the drama and power of the new laser powered Giant Screen digital theater. The Cubi Bar Café offers a unique dining experience, and the Flight Deck Store is the perfect place to find a souvenir that captures the spirit of Naval Aviation. Museum admission is FREE and open to the public. The National Naval Aviation Museum is open daily from 9 a.m.–5 p.m. For more information, visit www.NavalAviationMuseum.org.