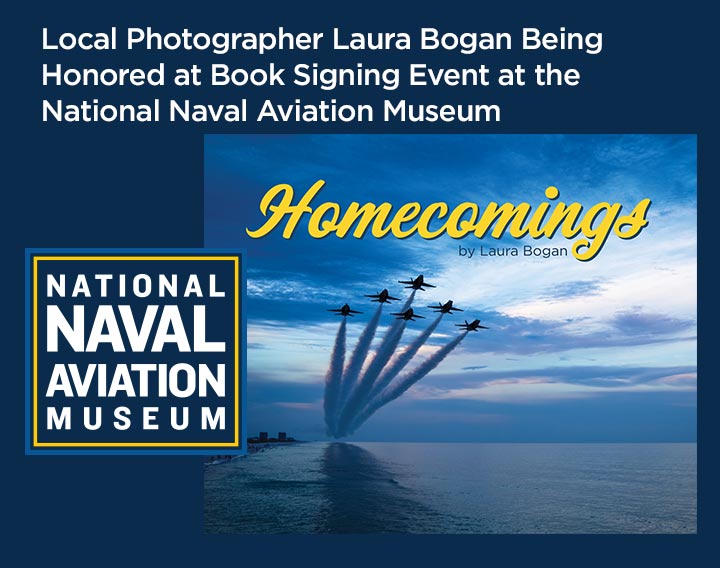 Posted at 10:39h in News by Admin 0 Comments
Share

April 11, 2019, Pensacola, Fla. Local photographer Laura Bogan will be signing copies of her new photography book, “Homecomings,” on Wed., April 17, at 12:30 p.m. in the Atrium of the National Naval Aviation Museum. Copies of the book are available for sale in the Museum’s Flight Deck Store. The book signing will take place during the U.S. Navy Blue Angels Autograph Session and is free and open to the public.
The U.S. Navy Flight Demonstration Squadron—better known as the Blue Angels—is one of the most iconic and respected aerobatics teams in the world. For years, Bogan has been chronicling the Blues as they return to Pensacola, the team’s beautiful seaside home on Florida’s Gulf Coast. Through moments both triumphant and poignant, Bogan has captured stunning scenes that, until now, have only been enjoyed by those lucky enough to be there.
Shooting from high in the sky, Bogan’s camera becomes the instrument through which she captures the breathtaking beauty of the Gulf Coast and the legendary Blue Angels. A graduate of Louisiana State University and the University of West Florida, Bogan is a strong believer in the power of images to tell stories in a way that no other medium can. She currently works for the Blue Angels Association and is a freelance photographer with clients across the Gulf Coast including the City of Pensacola, the National Flight Academy and the Blue Angels Association.
“Homecomings” is registered with the American Wholesale Book Company, Baker & Taylor, Follett Library Resources, Ingram, and Partners Book distributors and available online with Amazon, Books-A-Million, Barnes & Noble Booksellers and Mascot Books. “Homecomings” is officially licensed by the Department of the Navy.
Media Note: For more information about the National Naval Aviation Museum or Foundation, contact Malerie Shelton at (850) 453-2389 or mshelton@navalaviationmuseum.org.
About the National Naval Aviation Museum
The National Naval Aviation Museum, one of TripAdvisor’s “Top 25 Museums in the United States,” features nearly 350,000 square feet of displays and is one of the world’s largest aviation museums. Located aboard Pensacola Naval Air Station, the facility boasts more than 150 beautifully restored aircraft representing Navy, Marine Corps and Coast Guard aviation, and is one of Florida’s most visited museums. Be sure to visit Hangar Bay One, displaying aircraft of the post-WWII era including presidential helicopter, Marine One. Among the countless things to touch, see and experience are thrilling 3D and HD flight simulators and the new Blue Angels 4D Experience. Don’t miss the drama and power of the new laser powered Giant Screen digital theater. The Cubi Bar Café offers a unique dining experience, and the Flight Deck Store is the perfect place to find a souvenir that captures the spirit of Naval Aviation. Museum admission is FREE and open to the public. The National Naval Aviation Museum is open daily from 9 a.m.–5 p.m. For more information, visit www.NavalAviationMuseum.org.