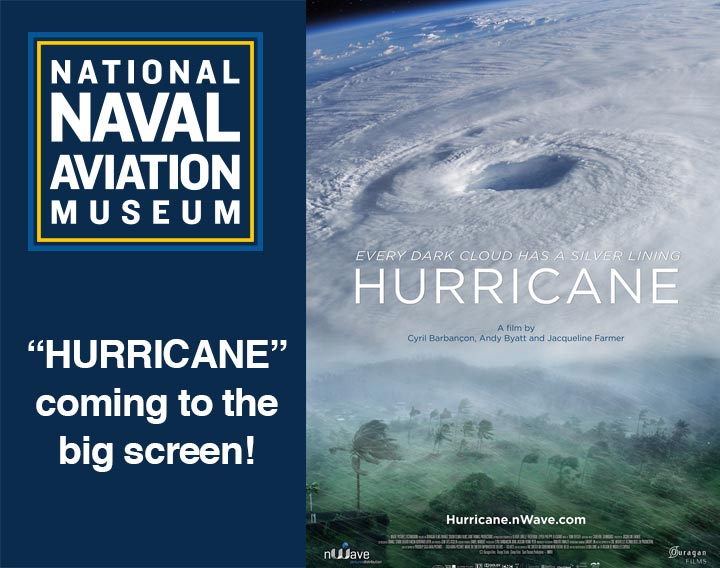 Posted at 14:53h in News by Admin 0 Comments
Share

March 8, 2017 –Pensacola, Fl—“Hurricane,” an nWave Pictures Distribution, will open at the Naval Aviation Memorial Giant Screen Theater on Monday, March 13. The film — a 30-minute, giant screen adventure — is the true story of a 15,000-kilometer journey in the footsteps of one of the most devastating natural events on our planet: the Atlantic Hurricane.

“Hurricane” is the journey of a weather system, fueled by a force so powerful that it was revered as a deity by ancient civilizations. From a sudden howling sand storm in Senegal heralding the coming monsoon, the winds transform over the Atlantic Ocean into a raging monster five hundred miles across. Ships are tossed on growing ocean swells, and the violent winds and torrential rains of Hurricane Lucy crash into the rainforests of the Caribbean before causing immense storm surges in the Gulf of Mexico.

“Hurricane” follows meteorologists and emergency crews as they battle to predict the storm’s path, while those in harm’s way prepare for the worst. Meanwhile, NASA’s satellites and hurricane tracking aircraft capture the enormity of the storm. We see the environmental impact on coral reefs, agriculture and wildlife as the Category 4 hurricane engulfs the region. But once the damage is cleared, the regenerative power of nature is captured as we witness the rebirth of a rainforest and the return of its hardiest creatures.

“Beyond the question of where hurricanes strike, we wanted to tell the tales of the wind. To speak of winds beyond imagination. To understand the stress of waiting; the relief of the near miss. We wanted to observe the fragility and resilience of nature, to discover what the mightiest weather system on earth means to all those who live beneath its shadow,” said producers Andy Byatt, Cyril Barbançon and Jacqueline Farmer.

The Naval Aviation Memorial Giant Screen Theater is located onboard Naval Air Station Pensacola.  For information on tickets and showtimes, please call 850-453-2389 or visit the website at http://www.navalaviationmuseum.org/attractions/giant-screen-theater/. “Hurricane” has a running time of 30 minutes. It will show daily at 9:30 a.m.