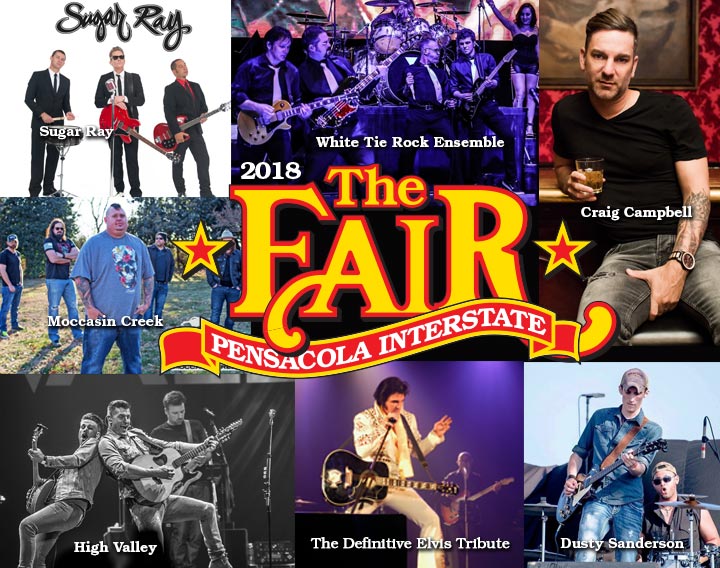 Posted at 10:09h in News by Admin 0 Comments
Share

September 4, 2018 –Pensacola Beach, Fl—Pensacola’s biggest and longest-running annual agricultural and entertainment tradition returns for its 84th season Thursday, Oct. 18 through Sunday, Oct. 28, bringing with it the excitement of attractions and screams from exhilarating rides, exhibits, fair food, fun and shows for the whole family.

“The music artists and live entertainment we have lined up this year are terrific,” said Don Frenkel, Pensacola Interstate Fair General Manager. “We are thrilled to bring such a variety of acts to Pensacola.”

For the third year in a row, the Fair’s musical line up kicks off opening night with the “Cat Country 98.7 BIG Lip Sync Battle Finals,” an epic showdown on Thursday, Oct. 18, starting at 7 p.m. Leading up to the finals, Cat Country will host a lip sync battle every Thursday, starting September 20, at various locations around Pensacola where three winning acts will be chosen each night. Those 12 winning acts will battle it out on stage to become the 2018 Lip Sync champion at the fairgrounds on Thursday, Oct. 18.

On Friday night, Oct. 19, journey back to the late ‘90s nostalgia when California-based rock, punk, reggae and ska band Sugar Ray takes the stage at 7:30 p.m. Front man Mark McGrath is sure to belt out Sugar Ray’s familiar radio-friendly hits like “Fly,” “Someday,” “When It’s Over,” and “Every Morning.

Canadian country bluegrass music duo, High Valley, takes the stage on Saturday, Oct. 20, at 7:30 p.m. to perform their hits like “She’s With Me,” “Come On Down,” and “County Line.” Brothers Brad and Curtis Rempel were signed to Atlantic Records in Nashville in October 2015. Shortly after that, their single “Make You Mine” was released to United States country radio to chart-topping success.

Bring the kids out Monday, Oct. 22, for Pensacon Day! Come in costume and join the party! From 4:30 to 6 p.m. and 7 to 8:30 p.m., get your picture taken with your favorite characters from Marvel, DC Comics, Star Wars, Star Trek and more! (Costume is optional.  PLEASE NOTE: The Fair is a family-friendly event. For safety, certain costume elements, props and accessories may not be allowed on rides.)

Combine rockabilly with country and with rap, and you get the progressive and raw sound of Tuesday night’s music act, Moccasin Creek. A group of good ‘ole boys hailing from Palatka, Florida, this redneck band is sure to perform some of their hits like “Southern Renegade,” “Watch This,” “White Trash Fabulous,” and “Porch Honky.” The band hits the stage at 7:30 p.m.

On Wednesday, Oct. 24, the public is invited to attend and participate in the 4-H Youth and FFA Livestock Auction at 7 p.m. from the Livestock Arena. Around 30 steers will be auctioned off this year. So don’t miss out! In addition, local country singer/songwriter Dusty Sanderson will be strumming his guitar on stage at 7:30 p.m., playing originals and covering some of his country and southern rock favorites.

As part of our special Senior Appreciation Day, come out on Thursday, Oct. 25, at 3:30 or 7:30 p.m. as Thane Dunn & His 8 Piece Cadillac Kings present “The Definitive Elvis Tribute.” With his amazing Elvis voice, natural physical resemblance, Presley-like sense of humour and magnetic personality — Thane truly delivers ”the full Elvis package.”

The Pensacola Interstate Fair welcomes back local band White Tie Rock Ensemble on Friday, Oct. 26, at 7:30 p.m. as they present a tribute to Led Zeppelin. The local group of musicians recreates classic rock albums with the precision and detail of a symphony. Expect to hear hits like “Whole Lotta Love,” “Black Dog,” and “Stairway to Heaven.”

American country music singer and songwriter Craig Campbell will bring his soulful songs to the stage on Saturday, Oct. 27, at 7:30 p.m. to close out the fair concert series. Hailing from Georgia, Campbell will perform songs like “Family Man,” “Keep Them Kisses Comin,” “Outta My Head,” and his powerful hit, “Outskirts of Heaven.”

New to the Fair this year are the Swifty Swine Racing Pigs, who race to the finish line for Oreo cookies. The pigs perform three shows a day Monday – Friday, and five shows per day on the weekends. In addition to the daily music acts, fairgoers can experience an interactive, hands-on exotic animal zoo at the Eudora Farm’s “Animals from Around the World” station. The petting zoo is open daily from fair open to close.

All musical performances are located on the Pepsi Open Air Stage. Entertainment shows at the Pensacola Interstate Fair are free with the price of admission.

For complete information, call (850) 944-4500 or visit PensacolaFair.com. You can also join us on Facebook at facebook.com/PensacolaInterstateFair.