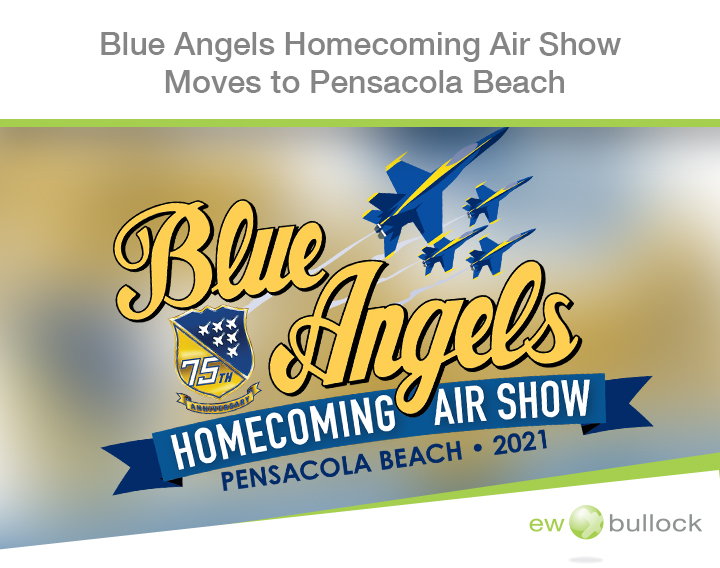 Posted at 11:00h in Business, News by Admin 0 Comments
Share

PENSACOLA, Fla. (September 2, 2021) — Due to COVID-19 restrictions onboard Naval Air Station Pensacola and other naval installations across the Southeast, the 2021 Blue Angels Homecoming Air Show will be moved to Pensacola Beach. The show dates will remain Friday and Saturday, Nov. 5 and 6.

This year’s air show will be the 75th anniversary of the formation of the U.S Navy Flight Demonstration Team, also known as the Blue Angels. The Blue Angels are the oldest continuously operating demonstration flight team in the world.

“This is a huge disappointment to us. Holding the Blue Angels Homecoming Air Show at NAS Pensacola is a long, proud, Pensacola tradition that is especially meaningful in this 75th anniversary year,” said Capt. Tim Kinsella, commanding officer of the base. “But, as I’ve said many times before, the links between this community and the military are incredibly strong. This airshow is important to the community, and I think in these times we probably need it more than ever.”

“I reached out to community leaders to see what was possible, and they immediately jumped in with both feet to assist, because they know how important this is to Pensacola,” said Kinsella. “This is Pensacola’s airshow. The Pensacola can-do spirit just makes me so proud to be a part of this community.”

Officials and representatives with Escambia County, the Santa Rosa Island Authority, Visit Pensacola and air show sponsor Kia Autosport have been working tirelessly to get the Homecoming Air Show on Pensacola Beach organized and funded in very short time.

To fund the Homecoming Air Show on Pensacola Beach, Visit Pensacola plans to use excess TDT funds from the area’s banner summer tourism season to pay for the event, combined with a major sponsorship donation from Kia Autosport.

In the same fashion as the July air show, the SRIA will host the 2021 Homecoming Show along Pensacola Beach on Friday, Nov. 5 and Saturday, Nov. 6, with the U.S. Navy Blue Angels headlining.

In addition to the Blue Angels, there will be a handful of aerobatic and stunt plane pilots performing as well. However, specific pilots, details and times are still being planned and confirmed.

“The SRIA jumped at the chance to be able to welcome home the Blues at the end of their 75th season on Pensacola Beach,” said Leigh Davis, Executive Director of the SRIA. “This is a win-win for the community and we look forward to hosting everyone on our beautiful beach come November.”

Please note: Show times are tentative and subject to change as the details are still being arranged. There will be no Sunday rain date show if Saturday’s air show is suspended or canceled due to weather.

More details about the Homecoming Air Show on Pensacola Beach will be announced as they become available.