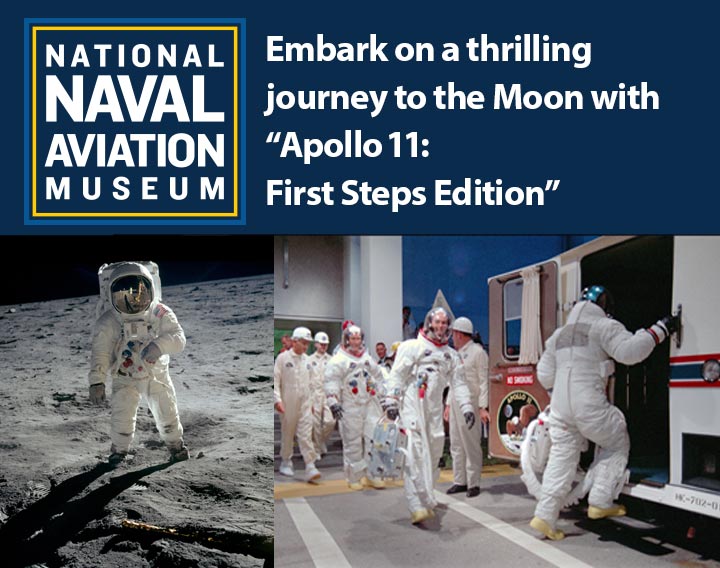 16 May Embark on a thrilling journey to the Moon with “Apollo 11: First Steps Edition”

Posted at 15:00h in News by Admin 0 Comments
Share

May 16, 2019, Pensacola, Fla. Audiences will experience one of humanity’s greatest achievements when Todd Douglas Miller’s “Apollo 11: First Steps Edition” opens at the Naval Aviation Memorial Giant Screen Theater beginning at noon on Friday, May 17. “Apollo 11: First Steps Edition” is a family-friendly film and will be shown daily at 12 and 2:30 p.m. with a running time of 47 minutes.
Produced by Statement Pictures in partnership with CNN Films and distributed by MacGillivray Freeman Films, “Apollo 11: First Steps Edition” is a special giant screen version, made exclusively for science centers and museum theaters, of Miller’s critically-acclaimed theatrical documentary Apollo 11. The film is timed to the much-anticipated celebration of the 50th anniversary of NASA’s Apollo 11 mission – the first to put men on the Moon.
“The Apollo 11 mission was humanity’s greatest adventure and we’re pleased to be bringing this edition to science centers and museums everywhere,” says director Todd Douglas Miller. “This film was designed to take full advantage of the immersive quality of IMAX and giant screen theaters.”
“We aimed to honor the original Apollo 11 mission by creating a film event that would capture the spectacle of this most extraordinary of human achievements,” says Courtney Sexton, executive producer and vice president of CNN Films. “Todd Douglas Miller’s ambitious ‘Apollo 11: First Steps Edition’ will thrill museum-goers with an incredible, unprecedented experience.”
Crafted from a newly discovered trove of never-before-seen 70mm footage and more than 11,000 hours of uncatalogued audio recordings, “Apollo 11: First Steps Edition” puts audiences at the center of NASA’s historic lunar landing. Miller and his team crafted “Apollo 11: First Steps Edition” entirely from archival materials. As the team was working closely with NASA and the National Archives (NARA) to locate all existing Apollo 11 footage, NARA staff members made a startling discovery that changed the course of the project: an unprocessed collection of 70mm large format footage, never before seen by the public, containing stunning shots of the launch, the inside of Mission Control, and recovery and post-mission activities. The other unexpected find was a massive cache of audio recordings that captured individual tracks from 60 key mission personnel throughout every moment of the mission.
“‘Apollo 11: First Steps Edition’ is a cinematic event and we cannot wait to see audiences experience the thrill of walking on the Moon with Neil Armstrong and Buzz Aldrin and becoming a part of history as the world celebrates this greatest of human accomplishments,” said Shaun MacGillivray, President of MacGillivray Freeman Films.
The film is family friendly and runs 47 minutes. The Naval Aviation Memorial Giant Screen Theater is located at 1750 Radford Blvd. in Pensacola, Florida. For more information, visit http://bit.ly/2Dbg0cU.
About MacGillivray Freeman Films
MacGillivray Freeman Films is the world’s foremost independent producer and distributor of giant-screen 70mm films with more than 40 films for IMAX and giant-screen theatres to its credit. Throughout the company’s 50-year history, its films have won numerous international awards including two Academy Award® nominations for The Living Sea and Dolphins and three films inducted into the IMAX Hall of Fame, including Everest, the highest grossing giant screen film of all time.  MacGillivray Freeman’s films are known for their artistry and celebration of science and the natural world. It is the first documentary film company to reach the one-billion-dollar benchmark for worldwide box office.
About the National Naval Aviation Museum
The National Naval Aviation Museum features nearly 350,000 square feet of displays and is one of the world’s largest aviation museums. Located aboard Pensacola Naval Air Station, the facility boasts more than 150 beautifully restored aircraft representing Navy, Marine Corps and Coast Guard aviation, and is one of Florida’s most visited museums. Be sure to visit Hangar Bay One, displaying aircraft of the post-WWII era including presidential helicopter, Marine One. Among the countless things to touch, see and experience are thrilling 3D and HD flight simulators and the new Blue Angels 4D Experience. Don’t miss the drama and power of the laser powered Giant Screen digital theater. The Cubi Bar Café offers a unique dining experience, and the Flight Deck Store is the perfect place to find a souvenir that captures the spirit of Naval Aviation. Museum admission is FREE and open to the public. The National Naval Aviation Museum is open daily from 9 a.m.–5 p.m. For more information, visit www.NavalAviationMuseum.org.